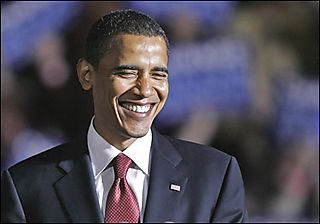 Last night marked an historic moment in American politics, perhaps in all of American history.  An African-American has been nominated by a major party as their nominee for President of the United States of America.  I don't know, but I have to believe that young men and women of color have to see their opportunities as citizens of this country a little differently this morning.  I also have to believe that African-Americans who lived through the tumult and sacrifice of the civil rights movement feel some validation at what they have symbolically achieved through Senator Obama's journey to this place in time.

As you know, if you have ever read this blog before, I am an enthusiastic supporter of Senator Obama and his politics of unity and hope.  I was impressed by his words last night, particularly when he expressed his humility at being placed in this position and his continued commitment to rise above the politics of division and separation.  I believe he defied the odds and clinched this nomination because people are tired of the ugliness of the status quo and want to believe that someone is capable of doing this thing we call public service in a different way.  I pray fervently that we have invested our votes wisely and that our optimism will be rewarded by real change.  I plan to take one of my kids to hear Senator Obama speak here in our area tomorrow, so stay tuned!